The Sky is Blue and Sometimes Cries 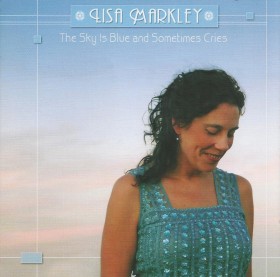 Lisa Markley turns her talents to the jazz genre with this new release, which features the lush and present sound of each individual instrument alongside her acclaimed vocals. The Sky Is Blue and Sometimes Cries is a jazz album that includes standards, original songs, and songs by North Texas songwriters that Lisa hopes to share with a wider audience. Songwriters appearing on The Sky Is Blue and Sometimes Cries include Grammy-winner Jeffrey Barnes of Brave Combo; KERA’s J. Paul Slavens, formerly of Ten Hands; and Little Jack Melody of Little Jack Melody and the Young Turks. Several of the songwriters and a talented array of studio musicians lend their talents on piano, guitar, clarinets, saxophone, and percussion.

On songs like “The Dry Cleaner from Des Moines” and the Latin-flavored “Eve Takes the Fall,” the deft interplay of the musicians creates engaging grooves that carry the listener through the song. But half the songs on the record are duets for voice and one instrument, where the expressive range of Lisa’s voice and the simple elegance of the songs shine. Lisa hoped to “stay out of the way and serve the songs” with these closely recorded arrangements, and engineer and producer Graham Duncan worked to create an “intimate club performance feel.”

“Simultaneously pensive and playful, Lisa Markley’s mellow The Sky is Blue and Sometimes Cries is as seductive as a fine glass of wine sipped sometime after midnight in a quiet, favorite bar.” Buddy Magazine, February 2007, Tom Geddie

“It’s no exaggeration to say that Lisa’s voice is the stuff of stardom. She packs more emotion into a single phrase than many musicians pack i nto an entire album. The power of her vocals, not to mention the artistry of her lyrics and phrasing, make the album a joy for lovers of jazz and singer-songwriters alike.” Cliff Dweller magazine, February 2007, Melody Townsel