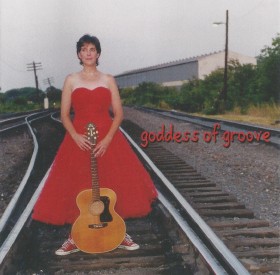 As Lisa’s playful title suggests, what’s been called her “inimitable groove-oriented edge” is front and center in the driving, percussive guitar on songs like “Rhythm of Candide,” “Wasteland,” and “Palo Duro.” But other songs on this album show impressive range. “No Way” sets the story of a doomed love affair to a melody with the gritty intensity of a rock ballad, while “Frida” adds an artistic, introspective tone.

Earthy guitars blend with Markley’s expressive but precise vocals; and we are as surprised to be swept away by the occasional romantic fiddle part as Lisa is in “Texas Sky”–“never thought I’d sing a song of Texas/much less a love song….” On the final track, “3 Legged Dog,” she reminds us that she is a songwriter with the ability to make us all recognize ourselves in her words– “three legged dog don’t go chasin’ round trains/his lesson’s been learned, he sees nothing to gain…”

“…Somewhat reminiscent of an early, less pop Joni Mitchell, Markley’s mature voice moves from upbeat sunshine, to deeper intimate whispers in the dark, to world wise and weary. Just when you think her world is both serious and helpless, she reminds you she’s got a sense of humor.” Buddy (The Original Texas Music Magazine)

“Lisa Markley is an insightful songwriter, singer and musician whose work deserves a much bigger audience. Folk or jazz, Lisa is an artist worth hearing.” Tom Geddie